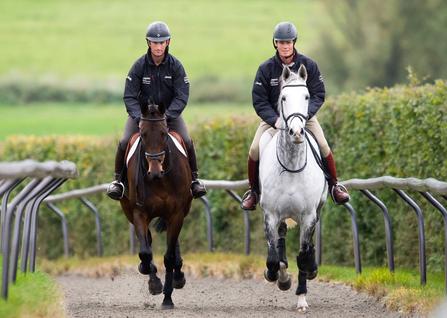 Andrew grew up surrounded by horses on the family's farm in Acton, MA. His more formal riding education started with an introduction to Marc Donovan at age 14.  Riding lessons eventually led to becoming a working student at Marc's training center in Southern Pines, NC in 2004.

Southern Pines, long a winter base for US team riders and professionals, was a perfect environment for learning and gave Andrew great exposure to upper level eventing.  He continued to work with Marc for several years competing   around the eastern US and participating in an extended clinic in Florida with Karen and David O'Connor.

In 2011 Andrew struck out on his own, moving to Robert Costello's Tanglewood Farm in Southern Pines, NC, where he established his own business training, teaching, buying, selling and competing horses.  He started riding with Robert, a former US Olympic team member and current Chairman of the USEF Eventing Selection Committee and John Zopatti, a USDF Gold Medalist.  Robert built on the foundation that Marc Donovan had established, coaching him from Intermediate to the 3* level.

Andrew acquired two upper level horses while with Robert.  Tic Tac was imported from Ireland in 2012 and competed through the Intermediate level and Powderhound, a NZTB gelding, was purchased from Gavilan Farm in 2013.  Tragically, Powderhound passed away during the CIC2* at The Fork Horse Trials in 2014 from an aneurysm.  Later that year, Andrew had the great, good fortune to start competing Rachael Jurgens' Ziggy up through the CIC3* level.

​​​     During this time, Andrew also began working with CANTER, a program which provides retired thoroughbred racehorses with opportunities for new careers.  Working with Allie Conrad, Executive Director of CANTER mid-Atlantic, Andrew trained and competed horses that came through the program.

An opportunity of a lifetime opened up in early 2016 when Andrew moved to England to work as a rider for British Olympic team member and former FEI World #1 Event Rider, William Fox-Pitt, at his Wood Lane Stables.  Living in the UK were two of the most important and educational years of his career.  William, Alice, and the rest of the Fox-Pitt Eventing team welcomed him immediately.  He took every opportunity given to watch, ride with, and be educated by William and his long time groom Jackie “Grands” Potts.  The first week in the UK, having only driven on the other side of the road once, Andrew drove William and and two former Rolex Kentucky 4* winners for a school.  The next hour was a mix of telling himself “is this real life” and “keep left” while trying to hold a natural conversation with his idol and now boss.  Luckily, everything went as planned.  That was the beginning of his many extrordinary experiences while in the UK.

Over the next two seasons, Andrew competed a total of 10 horses in 50 horse trials from BE100 (USA training level) to intermediate level including a CC1* at Houghton International.  He had the chance to watch and help William get Chilli Morning to the Rio Olympics and break in four 3 year olds including Tamarillo’s clone Tomatillo through jumping in his 4 year old year.  He visited Burghley, Badminton, Blenheim, and Barbury with the opportunity of walking the cross country course with William and cheering on team USA.  Andrew received excellent instruction from William as well as Tracie Robinson, Team GB’s long time dressage instructor.  He was able to coach a student, and good friend Alex, to his first ever event in his effort to support Hannah’s Willberry Wonder Pony charity.  His time spent at Pippa and William Funnell’s, The Billy Stud, while on break from Wood Lane Stables, exposed him to the production, sales, and training of young elite jumpers.

While looking for a new horse, and also in his down time, Andrew had the chance to travel to France, Italy, Hungary, Greece, Germany, Ireland and many parts of the UK.

As sad as Andrew was to leave William’s in November of 2017, he was excited for what the next chapter had to offer.  McConnon Eventing is now based out of Tallwoods Farm, Vass, NC where Andrew's establishing a team of horses and owners and is actively importing horses for sale.

​“Andrew has been my rider for the last two seasons and has been a real asset to my team. He has a wonderful way with young horses but has also been very effective home schooling my top horses such as Chilli Morning. He has grabbed and made the most of every opportunity available when competing. He has a great competition brain and in my opinion all the attributes to make a top international event rider and to fullfill his ambition of representing his country. He is a fantastic team player and a great guy to have around. I really hope he gets the support he deserves when he moves back home and builds a strong team of horses and owners. I wish him every success in the future and will always be available to support him in any way I can!” - William Fox-Pitt.